The past night had been the coldest to date. If not for the sleeping bag that was provided to us by our trekking agency, Adventure Mountain Explore Treks (AME Treks), I should be dead by now due to hypothermia. And though I felt better, I still woke up to a news that Doc Rhoda felt she wasn’t fit enough to continue with the trek and that she wished to just stay in Deboche for another day. Agot and Migs were too eager in encouraging Doc Rhoda to push herself, that her headache was normal, that she couldn’t stay in Deboche alone. I couldn’t muster myself to do the same. If we force Doc Rhoda to get going and she really was not okay, we’re gonna get in big trouble. But part of me was also hoping that what she was feeling was plain headache. 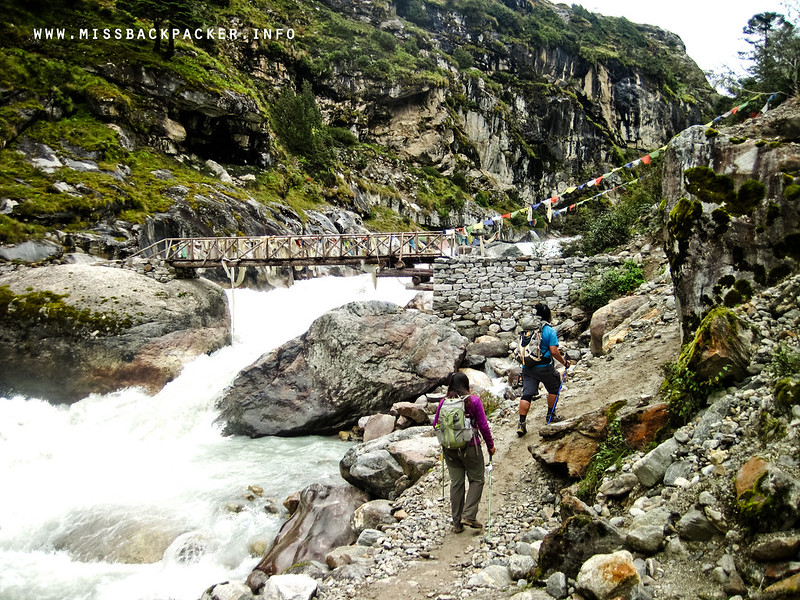 Apparently, Doc Rhoda had been awake since 1:00 AM. Extreme headache woke her up and she couldn’t make herself sleep again. We asked her to eat breakfast then gauge herself whether it would make her feel any better. Tears were gushing down her cheeks. I could feel her pain. I knew that she wanted to go on but also didn’t want to be a burden to the group. Kawawang Doc.

The hot soup that Doc Rhoda had might have renewed her energy that she was now more determined to continue trekking. Since all of us were already packed, we had to wait for Doc Rhoda to collect her stuff as she never bothered packing because she thought she was going to stay in Deboche. Once she was ready, we started our cold trek.

The day was gloomy, the wind more icy, and the sun never peeked even once. This was the worst day we had during our trek in terms of weather condition. There were parts of the trails where we couldn’t see what’s ahead of us because of the thick fog enveloping the surroundings. We also had to endure light rain showers.

Throughout Day 5 trekking, Doc Rhoda was at the end of the group with Bikal guiding her. I couldn’t even remember any photo where she was with us. It became even worst during the afternoon. The elevation made every movement more challenging. We could now feel that we’re getting nearer the base camp. Step, sigh, step, sigh. It was an exhausting routine. At 4,410 meters above sea level, we reached the village of Dingboche past 4:00 PM where we would be spending the rest of day as well as Day 6 for acclimatization. The light rain showers had become stronger.

While waiting for Doc Rhoda and Bikal to arrive, we treated ourselves with hot tea and cookies and I thought they were really good. This is one of things I love about hiking. Hiking or trekking makes me appreciate stuff I sometimes disregard; little things like how a hot cup of tea and plain cookies could taste so good. Then Bikal and a crying Doc Rhoda arrived.

According to her, her head really really hurt. Though I was feeling the same, I could sense the severity of hers. We calmed her saying that the trek for the day was over and we could now rest, have a sumptuous dinner and a good night sleep as the next day would be stress-free and would be dedicated to acclimatization.

The non-stop rain made the temperature even colder. I was still feeling under the weather even after having our dinner and so I asked Rowjie if we could wrap up our day earlier than the usual. I thought my night was great if not for the creaking sound that our bed made whenever Rowjie and I moved.

You see, there’s nothing really remarkable that happened this day but Day 6 would be fun and I can’t wait to share my story with you. For now, let me end this account with these two sets of photo slideshow during Day 5 trekking.