1900H : I was on the verge of breaking down. Elal and Gino were still missing. 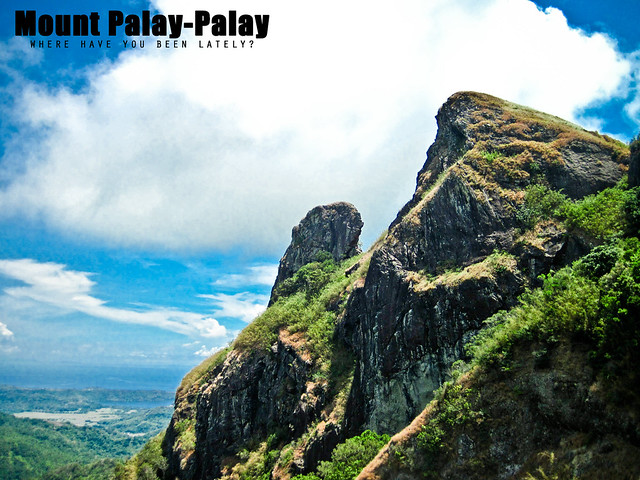 0930H: After a short briefing, I led the group consisted of Rob, Kirk, Marx, Kiki, Elal, Gino, RJ, Marvin, Rommel, and Gabi from the DENR station to the jump-off point of Pico de Loro alongside the road and started our trek. I repeatedly complaint at the first part of our trek that I hated this part of the trail and they would know why later on.

1015H : The group arrived in Manggahan. I asked them if they wanted to eat their packed lunch as there would no longer be any good spot along the trail where we could sit down and eat. The group obliged. We also spent a gruesome portion of time computing our budget and trying to figure out why we were missing a significant amount of money. The question was answered at the end of our day.

1045H : We started trekking again. I, on the other hand, was constantly reminding them of the basic rules in mountaineering. That trail signs play a significant role in mountain climbing because they will tell you if you are still in the right path or not, that it is a practice in the mountaineering community to greet everyone with courtesy while addressing the climbers ma’am or sir, that they can say take five if they want to rest, that they can stop and wait for someone’s aid if they think they are lost or if they do not know which way to go, that they must carry all their trash and not to leave any on the trail, that it is okay to get tired. RJ, Marvin, Gino, and Gabi were first-time climbers. This earned me a new title, Diwata ng Kagubatan (Forest Fairy).

1245H : In less than three hours, we reached the campsite and regrouped. Some of us had refreshments (oh yeah, there are locals who now sell cold sodas and sports drinks), some went straight to a nice view in the campsite where they could do the usual photoshoot.

1315H : Despite the scorching summer heat, everyone agreed to proceed with the climax of our activity, summitting the mountain. I must give props to RJ who courageously admitted that he could no longer continue on climbing as fear got into his nerves.  Marvin had to stay with him and give him comfort.

1340H : Everyone was so happy to have finally reached the summit but it didn’t end there. They wanted more, they wanted to test their limits and climb the Pico de Loro or Parrot’s Beak. And so they did.

1400H : Rob, Kiki, Rommel, Marx, Elal, and Gino reached the top of the parrot’s beak. Though I haven’t been to the beak yet, I still decided to just stay at the summit. It was freaking hot and what better to do than sit and seek shelter in the loving shades of an umbrella. Gabi also stayed and rest with me and Kirk who was tasked to take a gazillion photos of the other group at the beak.

1445H : Twenty minutes or so past and the parrot’s beak group came back to the summit. We had to reward ourselves with a few-minute rest and another round of cold refreshments. But my reminders that we need to hurry as we might not make it to the registration area before nighttime didn’t stop. No one but me brought head lamp, we couldn’t risk being in a big forest without any form of lighting.

1500H : Our descend started with the group’s renewed energy. I even jokingly said that they could run downhill if it would help. You would notice from this point on that I no longer have any photos of the trail or of the group. I already put my camera back to my day pack. I didn’t want distractions on our way down. I was so concerned with the time we have left to get back to the DENR station.

1600H : Everyone hurried and was eager to finally finish the trek that in an hour, we were back in the grassland.

1700H : The group regrouped in Manggahan. But since Rob, RJ, Marvin, and Gabi and I arrived last while the rest have already rested for quite sometime now, we asked them to go ahead and start cleaning up themselves once they arrived in DENR.

1720H : After resting, we decided to give it a go and started the final leg of our trek. We then again approached my dreaded part of the trail, the ascend back to the jump-off point. Robi, RJ, and Marvin went ahead of me and Gabi.

1750H : Gabi and I reached the DENR station. After an entire day of walking, hiking, stumbling, and cursing, I thought we could wrap up our Pico de Loro day hike with laughters but I thought wrong. Kirk asked me where were the others: Rob, RJ, Marvin, Elal, and Gino. My jaw dropped. I was the sweeper of the group. I didn’t stumble into any of them on our way back.

1800H : Rob, RJ, and Marvin arrived in a tricycle. They said they got lost and ended up on a wrong trail that still lead to the main road but far from where they were supposed to be.

1805H : I took a bath hoping that when I get out of the bathroom, Elal and Gino were already with the group. They couldn’t be lost as they have nothing with them that could help them during the night. No headlamp, no trail food, no water, nothing at all. What made the matters worst was that there was no network signal in the DENR station. We couldn’t get a hold of them.

1830H : I finished cleaning up myself but still no signs of Elal and Gino. It was already pitch black that time. If not for the light coming out from the lamps above our head, it was impossible to see a soul. We now concluded that the duo might be too busy chatting that they didn’t notice the board sign saying where the way to DENR station was and took a wrong turn.

1845H : We asked the people whom we paid at the DENR station where the way we suspected Elal and Gino have taken leads to. We were told that it leads to Maragondon after four hours but anyone who walk into that trail will pass by a quarry site. Surprisingly, the DENR people made no efforts to help us. So, what’s the Php 20 registration we paid for? Reason why we register ourselves is for these people to come and search for the registered mountaineers when they don’t come back at a given time.

1900H : I was on the verge of breaking down. Elal and Gino were still missing. I was partly responsible for what’s happening. I was the only one familiar with the mountain. I must’ve reiterated that the group should stay intact while trekking. I must’ve told the group to bring lighting regadless if it’s just a day hike. I wished that the couple were okay and that they return soon.

1930H : The driver of our rented van shouted that there were people arriving and that our friends might be one of them. I must have been a very good Diwata that my wishes were granted. Elal and Gino were now emerging from the dark with a group of mountaineers who didn’t let them go further astray. Million thanks to Sir Ben Cuales (I still can’t find his Facebook page) and his group for helping our friends. Props to UPS mountaineers who, despite their busy schedule, were more than willing to help us find our friends. Elal blogged the whole “lost” story here.

2000H : After some reconciliation and thanking, we were homebound. And to wrap up the day, my crazy friends, old and new, talked about nothing but ghost stories all throughout the trip back to Manila.

« Don’t tell my Mom I got stung by a Caterpillar
Read, Travel, and Blog »