The Tribhuvan airport is a complete chaos. From the arriving or departing passengers to the airport staff and even the airport itself. No computers, scanners, or anything digital. Everything is done manually. Being out of the airport is a satisfactory feeling. 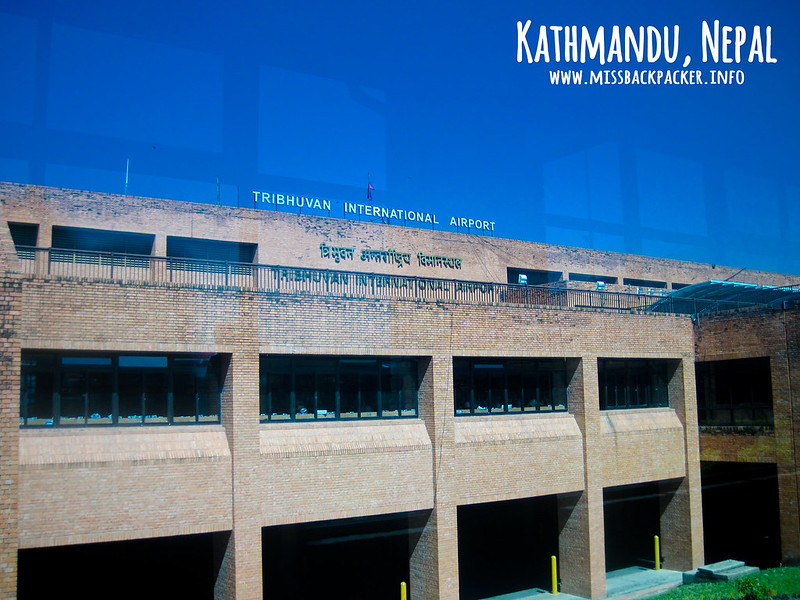 After getting our visas, we grab our backpacks from the baggage conveyor and head out to the gates. All of us are Nepal first-timers and have no idea what to expect. But one thing’s for sure. Nepalis do smell. They say we Filipinos stink too, like our fish sauce (patis). 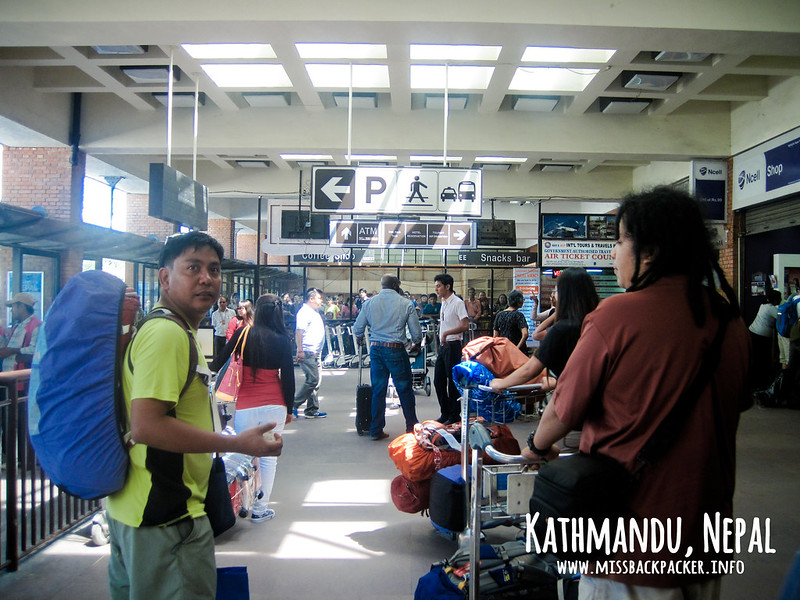 From the gates, we immediately see the guide we contacted back in the Philippines, Ramesh. His Facebook photos don’t lie, he’s tall, fit, and very handsome. Richard Gomez. He’s not the typical Nepali. According to him, there are two races in Nepal: the Mongols and the Aryans. Mongols are those who have chinky eyes similar with the Chinese people but with darker skin. Aryans, on the other hand, have similar features with the Middle Easterns and Ramesh is of the Aryan race.

At a later conversation, we learned that Ramesh holds a Bachelor’s Degree in English reason why he speaks very good English compared to the other Nepalis we have already conversed with. “English is my bread and butter,” says Ramesh. He’s known in the trekking community of Nepal because of his good communication skills, which most porters or guides don’t have. But he pronounces ask as axed. Ramesh, hi! :p

I bet he already knows how we look like since we’ve been bombarding him with questions when we were still in Manila. He waves and that confirms my hunches. The group greets him, we exchange hellos, shake hands, and all the hulabaloos of introduction. He then leads us to the parking lot where our van is waiting. But even before we can jump inside the van, he hangs marigold garlands to our necks which is very new to us. Ah, that feeling of being in a whole unfamiliar world. The laughter and excitement don’t end there. On our short ride to Kathmandu from the airport, we learned of some of the most iconic landmarks in Kathmandu. Sadly, we don’t have enough time to visit any of those.

As we are nearing Thamel, the heart of Kathmandu, we realized how different Kathmandu is from Manila. No offense to all Nepalis out there but however dirty Manila is, it’s incomparable to Kathmandu’s condition. There’s no concrete roads so you’d powdered yourself with dirt and dust. The creeks are filled with tons and tons of garbage. The busy roads and streets are manned by drivers honking all the time as if they’re angry. There are no buildings similar to our Tektite or RCBC plaza to think that it’s the capital of Nepal. By the looks of it, you’d have a feeling of being in India at the same time. Go picture it. And because of its current condition, Rowjie whispered, “Eto yung lugar na kakarating ko pa lang pero gusto ko na alisan.“

You have to have a different perspective on how you’d see and appreciate Kathmandu’s beauty. Aside from being the gateway to the highest mountains in the world, it has lots of interesting and iconic temples you won’t see anywhere else. The houses are built of real bricks! The culture is shockingly stunning. It is just very unfortunate for us that we don’t get to experience any of these because of our limited time. 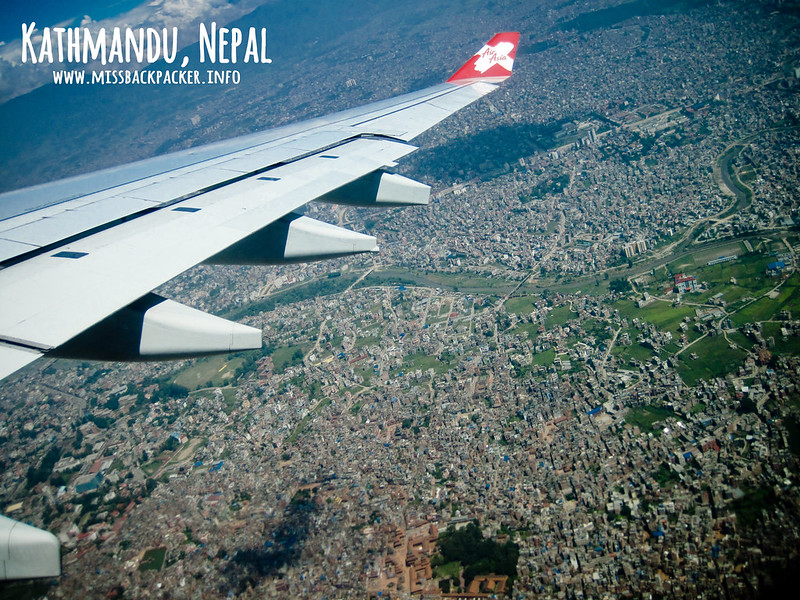 Nepal’s economy lies heavily to tourism. Let’s face the harsh truth, many people come to Nepal not because of its temples but because it’s where Everest is. I don’t think that Nepal, let alone Kathmandu, will have a high influx of tourist if not for its mountains. And Ramesh’s two cents? The corrupt government makes Kathmandu worse each year. Oh well, it happens everywhere. Potty politics.

Kathmandu is two hours late and four hours away from Malaysia. So if we leave Kuala Lumpur, the same time zone as Manila, 7:00 AM, we arrive in Kathmandu at 9:00 AM even if our stomachs are screaming for 11:00 AM lunch. We ask Ramesh if we can eat first because we are really starving but he wants us to have our money changed to Nepali Rupees first before anything else. True enough, we can’t eat if we don’t have money. He brings us to this money changer where we are given discount. By discount, I mean, higher conversion of our US dollars. Our $500 turned into NPR 55,000 for $1 = NPR 110 conversion.

Just beside the money changer are shops selling trekking stuff, mostly fake. Our time is very limited hence we need to cut our window shopping short and take our brunch. It is now 11:00 AM and the last trip of buses to Pokhara, which is seven to eight hours away, leaves at 1:00 PM. We can’t afford to miss that else we’ll be short one day for our trekking schedule.

We can’t be picky with what to eat for brunch. We barely have enough time. I choose what’s familiar to me, pork and rice. Them? They want to try Dal Bhat, a traditional meal popular in both Nepal and India. It’s composed of steamed rice, lentil soup, and the Nepali bread roti. Honestly, I only liked roti.

After eating, we immediately dragged our heavy bodies out of the restaurant to find a cab that will bring us to the bus terminal. Ramesh does the talking for us. It saves us time, really. We need to hire two cabs because the seven of us won’t fit in Nepal’s minute cabs. Then we arrive in the terminal. Er, it’s not the kind of terminal we all have in mind. It’s more of a jeepney stop with an aggressive barker. Again, Ramesh does the talking and lets us hop in the van. But before we even leave, a heated discussion happens between the barker and Ramesh. We don’t speak their language but from how Ramesh reacts, we think the barker wants to let MORE passengers than what it can carry ride the van. Luckily, the other local passengers we are with speak out and the barker had no choice but to let us off. 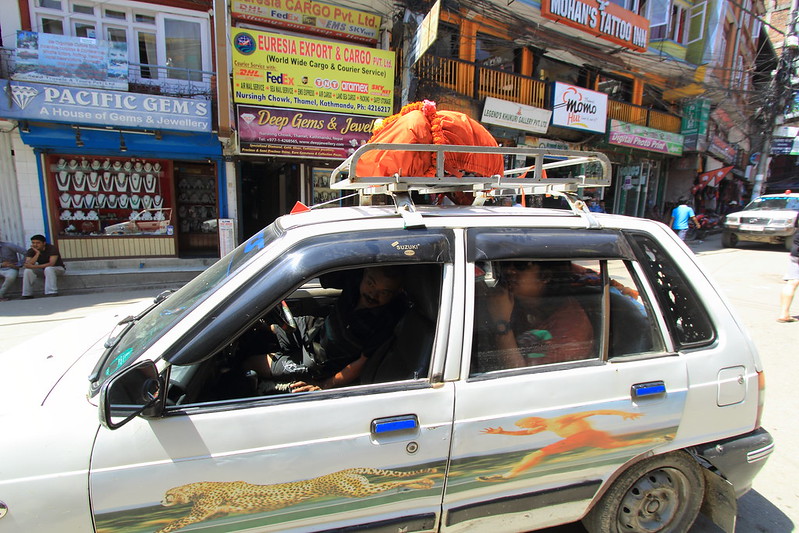 Alright, the adventure doesn’t cease there. Just a couple of hours after we leave Kathmandu, all the vehicles in front of us suddenly stop and so does the van we are riding. It’s scorching hot inside our non-air conditioned van but we remain seated for the first few minutes. Five minutes have passed, we aren’t still moving. Ten minutes. Fifteen minutes. Aaaah. We need to get out of the van if we don’t want to get fried. We then find out that a tragic accident involving locals happened just a few meters from where we are. The road is too small for all of the other passing vehicles to just move on. 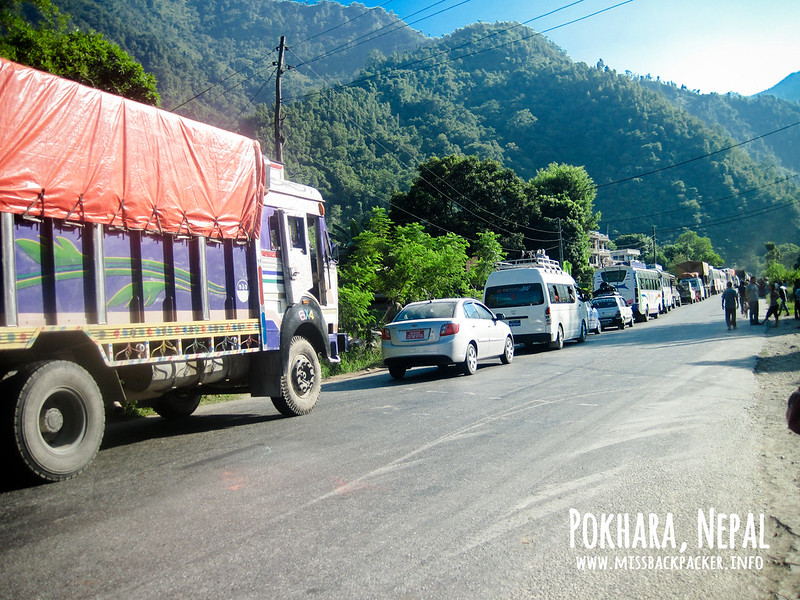 What a luck. We have been rushing all day then because of the accident, it’s as if our efforts are wasted. We stayed for at least two hours killing time and asking Ramesh stupid questions like, “Is this real? Is this really marijuana?” in utter disbelief while holding a stalk of “wild” weed along the road. Apparently, this is just a common thing in Nepal. You can smoke it if you want. According to Ramesh, Nepali authority doesn’t really give shit if you get stoned by it but you don’t have to export it else you want to end up in jail. The ironic thing though, I didn’t see any police during our whole stay in Nepal. Herbal junkies, you know where to go on your next vacation. Haha. 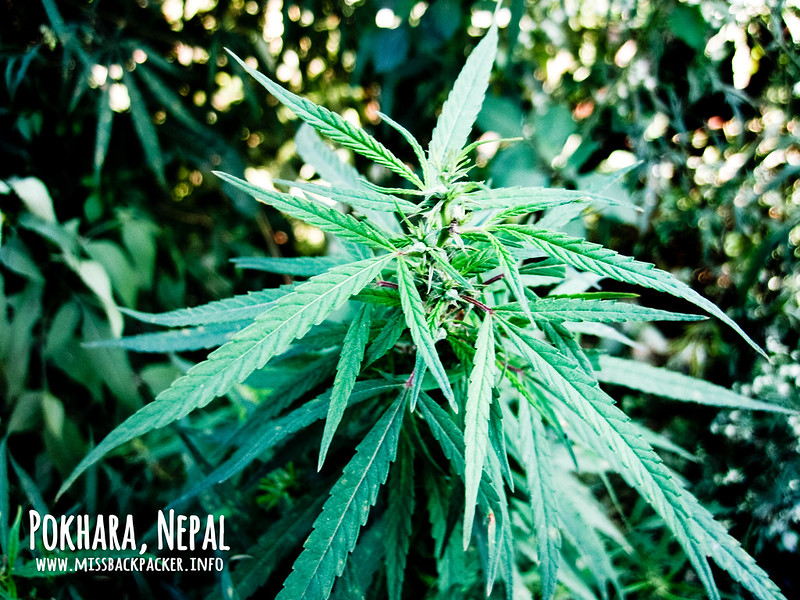 After two hours, at last, the vehicles in front of us start moving. We immediately hop back in the van. If you think we just slept for the rest of the road trip, I’m sorry to fail you but we didn’t. Nepal is a right-hand driving country. I am sitting in the right side of the van and I am a witness of how reckless our driver is. You know that feeling that as if you’re just half an inch away from the vehicle on the other lane of the road. That’s how the rest of our trip goes. Had he joined F1, he could’ve had Michael Schumacher eaten dust. I feel sorry for the vehicle we’re in, it’s being beaten up. The driver doesn’t care if there’s a hump or a hole on the road, a large chunk of rock, people crossing, or whatever. He just doesn’t care. Do you think we get to sleep during the trip? Na-ah.

It’s past 8:00 PM but we are still alive despite the many close encounters with the god of death due to car crash. It’s also the time we first set foot in Pokhara. Even at night, we can see how different it is from Kathmandu. It’s less stressed, more peaceful. Another argument between Ramesh and this time, the driver, happened but I will no longer mention it. For all we know, Ramesh is just trying to shoo people who are trying to take advantage of our little knowledge of Nepal.

Tired and starving from our road trip, we immediately had ourselves checked-in the hotel I booked and leave our bags for a quick dinner.

The hotel, oh, the hotel. We only paid, what, PHP 150 for a night stay in the hotel with good reviews. They are clueless on what we are doing there until I showed them the voucher I got when I booked a room. We are then asked if we want to stay in separate rooms which we refused since we want to be together inside just one room. The staff hands me a key to a room with four single beds. Me and Rowjie are sharing one bed. Miguel and Agot will do the same thing while Dwine and Melo will have separate beds all to themselves. Ramesh is spending the night on a mattress. 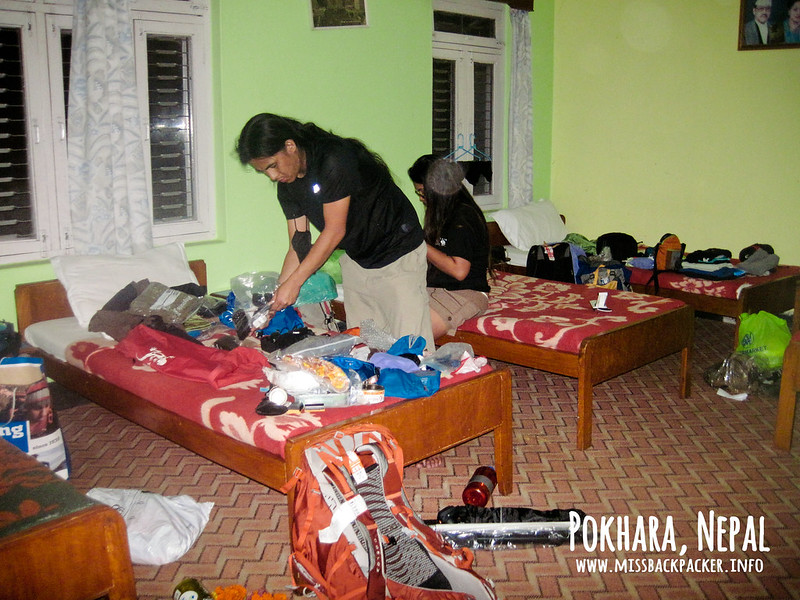 The next day, what we saw from the garden in the hotel is a shocker. You have to stay tuned for my next post to find out what it is we saw.

Straight to the beach, please!

Take me back to Batanes. ✈️ #travel #outdoor

I will never get tired of this view. 🏝

This, a decade ago. Wala pang pang-magarbong kasal

Husband and Wife who ride bikes with each other ar